So who is this Jason Welle, EssJay and why is he being ordained to the priesthood?

So just who is this Jason Welle, EssJay?  Well, he is not Father Jason Welle, OFM so let us be clear about that. Two different men, two different Orders, one name. Too bad for the Friar Welle.

According to his bio on The Jesuit Post, Jason Welle, S.J., was "born and raised in southern California, attended a high school seminary before going to University of California, Santa Cruz to complete a B.A. in Community Studies. He worked nine years in the travel industry, including seven as a flight attendant. In the midst of his high-in-the-sky career, he took a leave to do something more down-to-earth: serving as a Peace Corps Volunteer in Malawi. Jason is now studying theology in Berkeley, CA." 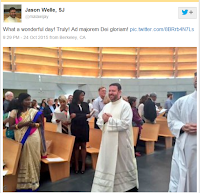 Jason "really was a Flight Attendant for a major airline"
and makes a big deal about it in the linked video and other speeches. He decided that the Jesuits were a better choice for him to "give his life completely over to the service of the poor." As Jason was involved prior to that in the Peace Corps he is clearly motivated by some sort of a altruism. Yet, is the first reason to be priest not to be an Alter Christus and to give oneself over completely to the service of Christ and through Christ to help all people come to Him, be they poor or even the rich? One does not need to become a priest to help the poor. Atheists can do that. Jason was ordained to the diaconate in October in Oakland. He is a member of the Oregon Province of the Jesuits.

Quite bold and careless with his social media, as can be seen in the photo above from his Facebook with the rainbow flag superimposed over his face. Our EssJay friend has some other interesting photos and Tweets that deserve a view.

This one speaks for itself, of course. It was from the decision by the United States Supreme Court to strike down laws declaring that a man cannot marry a man and a woman cannot marry a woman. Well, they cannot no matter what SCOTUS or Welle think or say. #LoveHurts, eh? So will Hell! As for his thoughts on sodomite and lesbian so-called "marriage", our regular commenter DJR reminds of Welle's thoughts in this piece. 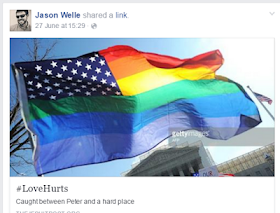 Now look, I love Lucy as much as anyone; I was born in 1956 during the golden age of television; in fact, Fox and I had a laugh watching "Yours, Mine and Ours" the other night, (where was that chapel) and we were happy to see a "Catholic" wedding and merger of their 18. Who could forget as well, The Long, Long Trailer with Lucy and Desi and of course, the New York shenanigans with the Mertz's. But truly, what does it say about the maturity of one who would mock a Saint of God on her feast day with this? 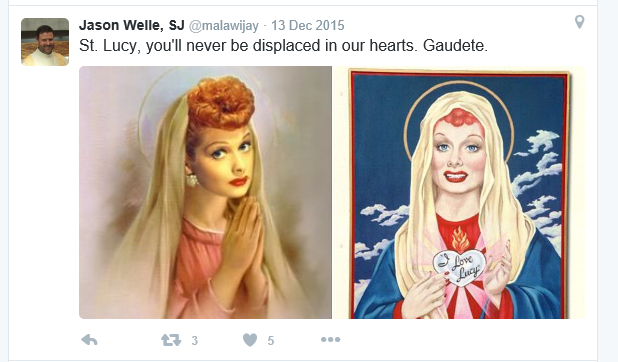 What of this profanity then? Well, we've all used the "F" word from time to time, to be sure. However, one should be particularly careful on social media about using such a word, no? And what if the profanity was used in the sense of a "prayer" and you are a Deacon of the Catholic Church. Is this an acceptable behaviour of a cleric, a Jesuit?

Yet again, we find Deacon Welle, EssJay up to no good on social media. Clearly, he needs to spend more time with his Breviary. It seems that he thinks Mohammed was a prophet, Muslims certainly do, of course. However, for a Catholic, and in particular one who has presumably studied theology, philosophy, church history and is about to be ordained to the priesthood to call that desert devil a prophet, when in reality he was an antichrist or St. Paul is a liar, is something quite different. If Mohammed was a "prophet" then Jesus was a liar too as were all of His disciples. For Welle, it is not enough to blaspheme God by putting a man who was a murderer, thief, warlord and child molester on the same level as the God Himself come to earth as the WORD MADE FLESH, Our Lord Jesus Christ, but he then blasphemes Him by mocking his Last Supper making it akin to just your typical birthday party with party hats and favours. 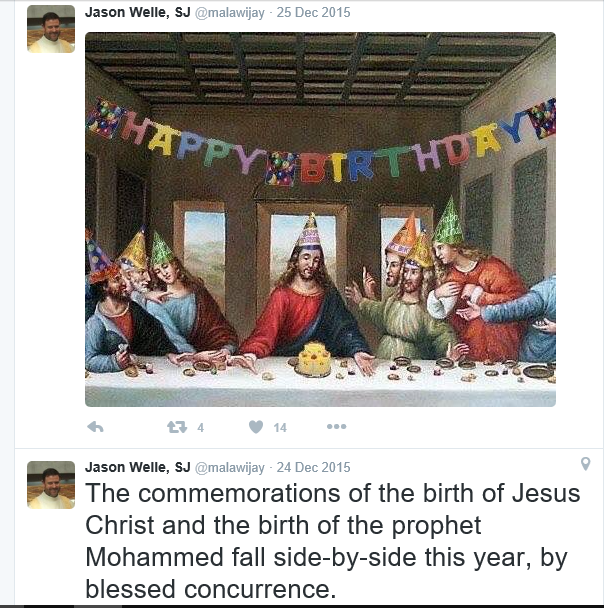 Jason Welle, S.J. does not seem to have been fit to be ordained to the clerical state as a deacon. Those posts above were after his diaconal ordination. The "gaying" of his picture took place before.

Did Jason Welle really have the intellectual and spiritual maturity to be ordained to the diaconate?

Does he have the maturity and spiritual discipline to be ordained to the priesthood? I think not.

Deacon Welle, S.J. is a member of the Oregon Province of the Jesuits. A quick search reveals a few interesting facts about this Jesuit Province. Shall we take a look at a brief history from just a few years ago?

Do they every learn?

Special thanks to Barona for his assistance and collaboration.

Please write your concerns to Bishop Barber at the following email: bishop@oakdiocese.org

PLEASE USE A "HANDLE"

I WILL DELETE WHEN NECESSARY