Timothy Radcliffe's heresy and vulgarity on his "eucharistic sodomy" is not new - Was Pope Francis aware of it or not?

Barona at Toronto Catholic Witness sent me this link to an article by Randy Engel on St. Peter' Damian's Book of Gomorrah. The original article was published in 2002 in Catholic Family News. Here is the relevant excerpt on Timothy Radcliffe, O.P., just appointed as a Consultor to the Vatican by the Pope.

The rest of the article along with Part I deserves to be read and studied in its entirely.

As for the Pope and this appointment, we can assume one of the following:

Is the Bishop of Rome aware that this man referred to sodomy as being "eucharistic?" 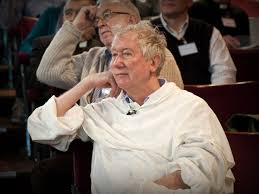 By way of comparing the views of St. Peter Damian on the vice of sodomy in clerical and monastic ranks with the modern post-Vatican II view on homosexuality, I have selected a Lenten Letter titled, "The Promise of Life," by Father Timothy Radcliffe. [73]  Radcliffe, the Master of the Dominican Order, issued his message on February 25, Ash Wednesday 1998. The English-born aristocrat was elected in 1992 to serve a nine-year term and was residing at the Santa Sabina priory at Rome, when the letter was issued and subsequently posted on the Vatican's web site, which is where I first read it.
In light of the major homosexual scandals that have plagued the priesthood and religious life worldwide, I was interested to see if Father Radcliffe would discuss the issue of homosexuality in Dominican ranks. He did - both directly and indirectly.
The first indirect reference to homosexuality was Radcliffe's quoting of American Dominican and writer Donald Goergen, OP on the subject of celibacy. The quote reads: "Celibacy does not witness to anything. But celibates do. We witness to the Kingdom if we are seen to be people whose chastity liberates us for life." [74]
My first thought when I read the Goergen quote was, why, of all the Dominicans he could have chosen to quote on celibacy, did Radcliffe choose a man whose personal and private life has been distinguished by an open and long-term advocacy and financial support of clerical homosexuality.
Father Goergen, who is currently living with the "Friends of God," a Hindu-styled Dominican Ashram in Kenosha, Wisconsin, began his early claim to infamy with the publication of his book The Sexual Celibate in 1974. [75]
Based on notes from lectures given to Dominican seminarians, Goergen's homosexual apologia speaks of "healthy homosexuality," promotes the homosexual "continuum" theories of the predatory homosexual and bisexual Alfred Kinsey, decries the "disease" of "homophobia," defines homosexuality according to the Gay Manifesto as "the capacity to love someone of the same sex," holds the door open for homosexual 'unions' by stating that, "genital activity should be the expression of a permanent relationship which involves fidelity," states that "so-called traditional Christian attitudes towards homosexuality are beginning to change," claims that "homosexuality can exist in healthy, Christian and graced forms," defends masturbation as being a genital activity that is "not bad, not unhealthy, not harmful, not immoral, even for a celibate," and then gives the sodomical coup de grace by attacking the perpetual virginity of Our Lady. [76]
Goergen's connections to the homosexual network in the Church go back many years. In Rev. Enrique T. Rueda's 1982 classic expose, The Homosexual Network, Goergen gets three dishonorable mentions for his advocacy of homosexuality. [77] He was also an early financial supporter of Communication Ministry, Inc., "an underground 'ministry' for lesbian nuns and gay clergy and religious." [78]
Soon after his election in 1985 as Provincial Superior to the St. Albert the Great Central Province, Goergen, a devotee of Teilhard de Chardin [OLW note: Chardin was condemned by the Church], began his search and destroy operation against many of the faithful and nationally outstanding Dominicans in St. Albert the Great Province including Father Charles Fiore, Father John O'Connor and the traditionalist Dominicans teaching at Fenwick High School. The River Forest Priory was transformed into a homosexual 'safe house' for other clerical perverts. [79]
This action is in stark contrast to the protection the young turk Goergen offered to the notorious Father Matthew "Creation Spirituality" Fox, champion of "lust," "sexual mysticism," and homosexuality as "the first gift of the Cosmic Christ". [80] In 1988, when the Holy See finally insisted that Fox be removed and silenced in order to finally halt the spread of his errors, Fox received an all expense one-year sabbatical during which he continued his heretical tirades. [81] Even after Fox left the Dominican Order and the Church to become an Episcopal 'priest' in California, Goergen continued to defend Fox's heterodox views on faith and morals.
So again I ask, why would Radcliffe quote Goergen on any subject, most especially clerical celibacy?
The answer I believe lies in the second of Goergen's quotes, cited by Radcliffe in "The Promise of Life" in which Goergen espouses the familiar litany of the Left, almost identical to that espoused by Fox:
"If I partake of consumer society, defend capitalism, tolerate machismo, believe that Western society is superior to others, and am sexually abstinent, I am simply witnessing to that for which we stand: capitalism, sexism, Western arrogance, and sexual abstinence. The latter is hardly deeply meaningful and understandably questioned." [82]
For many bishops and religious superiors like Radcliffe, a seminarian's or priest's homosexual activities and advocacy can be overlooked as long as the offending priest adheres to the gospel of Liberalism. It is not until a diocese or religious order is hit with catastrophic lawsuits related to the criminal sex abuse of underage young boys and young men, including seminarians and religious novices, by homosexual clerics, that the former have a second thought about the policy of accepting and ordaining homosexuals to the priesthood and religious life.

However, in the case of Radcliffe, it appears that the pressure of pederast lawsuits against offending Dominicans worldwide had not yet reached critical mass in 1998. Indeed, in the paragraph titled "Communities of Hope," just preceding his statement on the acceptance of homosexual candidates into the Order, the Master General insists that, "Our communities must be places in which there is no accusation, '... the accuser of our brethren is cast forth ...' "(Apoc. 12.10) [83]  Positioned at it is, just before his support for homosexual candidates and homosexual members of the Order, one might easily interpret his comment as a warning against in-house 'whistle- blowers' who reveal clerical sexual misconduct and criminal acts by their fellow Dominicans to their superiors or to public authorities and law enforcement officers.
Getting to the specific issue of "Community and Sexual Orientation," the Master General begins with the statement that various cultures react differently to "the admission of people of homosexual orientation to religious life," with some holding it to be "virtually unthinkable," while others accept it "without question." [84]
Frankly, outside of ancient cultures that practice certain pagan rites or followed certain gnostic doctrines, I have not run across any peoples that accept "without question" men who unnaturally lust after other men - whatever their role in the community. But even if such a culture existed in modern times, its beliefs should not matter a hill of beans to the universal head of the Dominican Order whose sole concern, one would think, would be what Christ, His Saints (including St. Dominic) and His Church teaches on the matter of homosexuality. And that teaching is clear - from the time of the Apostles - for a man to lust after and desire another man is perverse and acting on that unnatural desire and lust is an abomination in the eyes of God.
In any case, Radcliffe tells his fellow Dominicans not to worry about the matter of sexual orientation. "It is not for us to tell God whom He may or may not call to religious life," he states. And besides, he adds, the General Chapter of Caleruega, after much debate, affirmed that "the same demands of chastity apply to all brethren of whatever sexual orientation, and so no one can be excluded on this ground". [85]
The actual text from the Acts of the General Chapter of Diffinitors of the Order of Friars Preachers meeting from July 17-August 8, 1995 at Caleruega, Spain (the birthplace of St. Dominic) reads:


"Ö as a radical demand, the vow of chastity is equally binding on homosexuals and heterosexuals. Hence, no sexual orientation is a priori incompatible with the call to chastity and the fraternal life." (emphasis added) [86]

[Note: The above reference to "no sexual orientation" is an extremely sophisticated turn-of- words that leaves the door open for lesbianism, transvestitism, transsexualism, pederasty, pedophilia, sado/masochism and other sexual perversions. The fact that the worldwide Dominican leadership permitted such a statement to be incorporated into an official pronouncement of the Order demonstrates in a concrete manner the degree to which the Dominicans are now controlled by the homosexualists and their minions.]
Radcliffe concludes his segment on "sexual orientation" with words of compassion for his Dominican homosexual brethren, but he warns the emergence "of any subgroups within a community, based on sexual orientation, would be highly divisive," and "threaten the unity of the community," and "make it harder for the brethren to practice the chastity that he has vowed". [87]
Vox Cantoris at Monday, May 18, 2015
Share

PLEASE USE A "HANDLE"

I WILL DELETE WHEN NECESSARY